The time since my last report has seen many changes! A strong cold front dropped water temps into the high forties in the rivers and  low fifties in the mainstem of the Bay. While this drop in temperatures did move some fish around there is great fishing to be had if you can find the rockfish. They are relating to the movements of baitfish over, open water of the bay. In the rivers look for clean hard bottom areas with good current flow to find Stripers. Some of the best fishing of the year is at hand…GO FISHING NOW!

The Walleye bite in the lower Susquehanna has been consistent. I spent two evenings on the river last week chasing the Walleye. Monday I struck out but my buddy Gerald Eldreth had three that night like this nice 21″ fish… Thanks for the fish lessons buddy!

A few nights later I went back and landed three, missed two and one came unbuttoned. Most of my Walleye are caught on Stick-baits like the Rapala F-11 in firetiger, this night all fish came on the little jig and Kietec paddletail. I love jigging the River!

We selective harvest fish between 17 and 22 inches… Release the larger Breeders!

My Friend John David McCollum releases almost all the Walleye he catches. “Dave” has long been a voice of reason on conserving these wonderful fish. Walleye are a species that can be fished down easily. Keep a few, release the rest…have fish to catch next year! 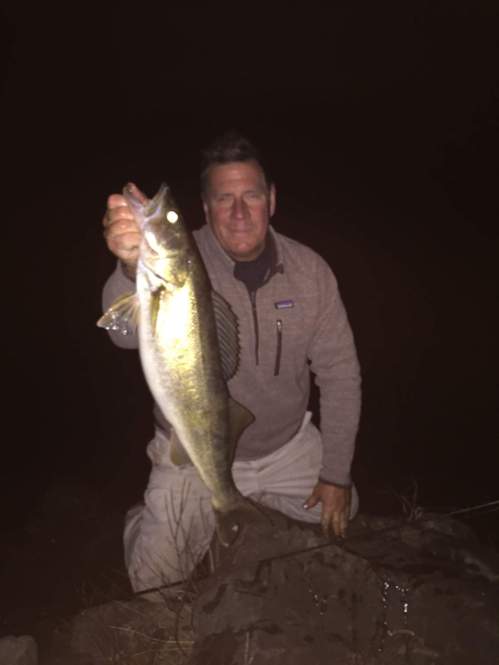 Thursday night, I fished the mouth of the Chester River with Dan Kilroy and Lisa Doricchi. We had to look around awhile before finding the good fish but a fast bite developed before sunset on fish to 32″… Once again Dan Kilroy had the big fish. 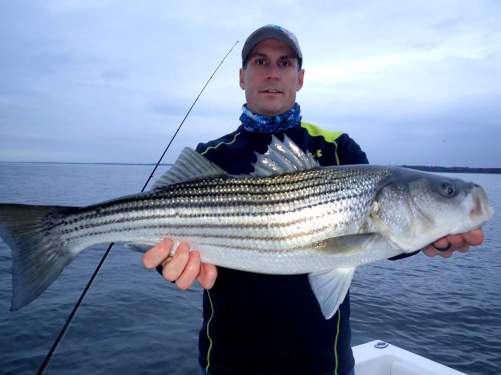 Lisa and I caught our share of really fat, beautifully colored fall Rockfish! We caught while “Snap jigging” Bust’em baits plastics, Thumper jigs, and large Paddle-tails. Only one short fish on topwater. The bigger fish were down on the bottom below the smaller fish.

My next trip was local in my home waters of the upper, upper bay fishing with my  friend and local guide Carter Dudzinski and his brother Daniel. We located several schools of nice Rockfish to 26″.

Carter is a smart young fisherman and had 4 fish in the box before Daniel and I caught on to what he was doing. Adding “Maximum Float time” to the jig is what it took. The fish wanted a painfully slow falling lure. As soon as I lightened up my jighead to 3/8 oz. I started catching. Daniel followed suit and soon we were catching doubles and almost had a triple but the fish came unbuttoned. Excellent jigging on the winter pattern! Be sure to slow your jig and create “maximum float time” to catch winter rockfish like these…

If you want to spend a day on the water with a good local guide and learn this style of fishing Carter would be a good choice. He is also a hunting guide and on the right day you could hunt in the morning and fish in the afternoon! Give him a call at 443-553-7874

The following day I returned to the Elk River with long time “Fish sister” Lisa Doricchi we have had some great days on the water over the years and this one was no exception! Just like the day before the fish wanted that slow fall on a light jighead. Lisa had two fish the first ten minutes! We found two groups of fish, both were scattered over clean, hard bottom areas with very irregular contours, between 16 and 20′ depths. The fish were stuck on the bottom and the slow falling jig was too much for them to resist. We caught good numbers of fish at mid-day. Lisa had Big Fish honors with this 26″ thick bodied fish. Great fishing right now… close to home! 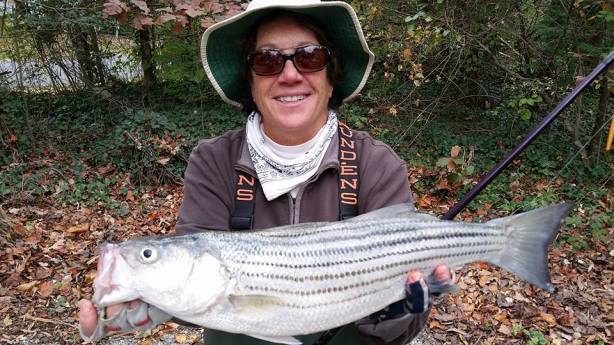 Todd Mackie is a customer at the shop. He has been asking about light tackle jigging and wanting to learn more about it. I agreed to go with him on his boat and show him the ropes. We launched a Mattapeake and fished the Mid-Bay area.  8 hours of fishing and 80 miles later we found the right group of fish. We had fish to thirty inches but mostly it was mid-twenties size fish every cast for awhile! I think he got an education on jigging, finding fish and knowing when to go and when to  stay put. It was a good bite at sunset. 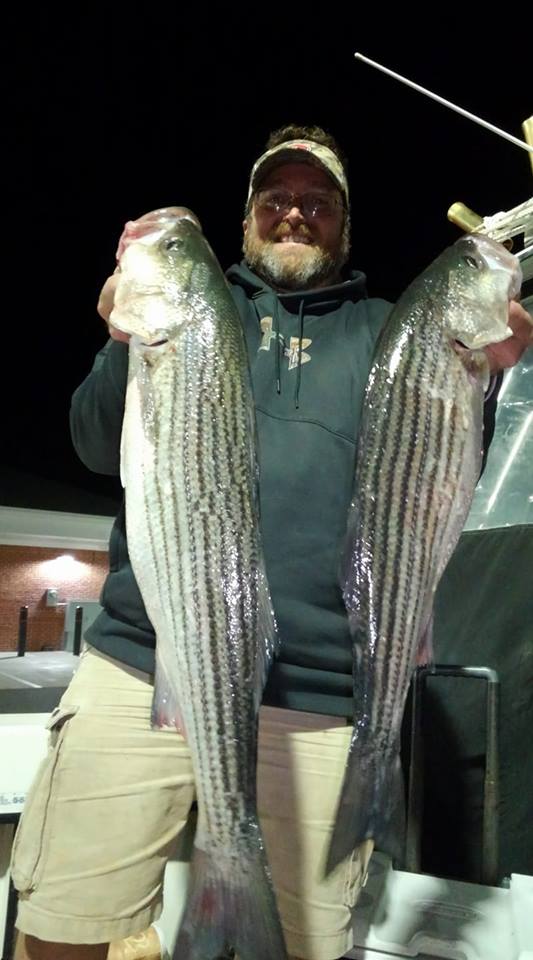 We are blessed to have this good fishing up and down the bay!  The weather is still pleasant so don’t put that gear away just yet. Stop by the shop this week end and talk fishing, see what lures are hot and get the low down on how to catch these fish!  I hope to see you on the water or in the shop. Let’s go fishing!