Hello Folks! 2018 has been a good year so far. The winter fishing for yellow perch was consistent during the later part of the winter. Health conditions have kept me off the water many days. My fish partner Ange Harclerode took our friends Dan Dudzinski and Josh Simon yellow perch fishing in the Sassafras and had a 3 man limit of Perch up to 15″… Good catching guys!

Ange has become very good at finding these winter fish!

After the yellow perch spawned we had a two week period of excellent Crappie fishing followed by an extended run of White Perch that started early and ended late. One of our Pro-staff at Sarge’s Tyler McCummings did well jigging the White Perch using a small casting spoon and one of my flies tied above it.  When the bite got tough live grass shrimp added to the jig caught fast. Bust’em Baits stingers on a small jighead worked well for the Crappie on the upper Chester River. The addition of Pro-Cure Panfish magic kept the fast bite going…. 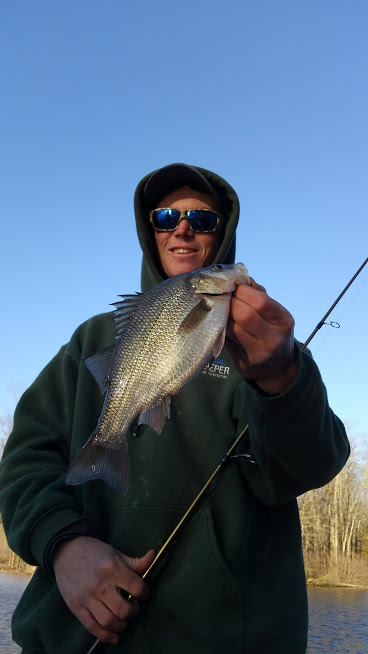 Herring and Hickory Shad have shown up in most rivers and the Stripers are right behind them. One of the places you can find Stripers chasing Herring is on the Susquehanna Flats. I have only been on the flats three times this year. On each trip the key to finding the fish was finding the warmest water in the area. The other key to success was using lighter than normal jig heads to provide as much “Float Time” as possible. They wanted the jig failing painfully slow. Faster retrieves  with heavier heads did not get hit. Guys fishing plugs with a slow stop and go retrieve are catching also. We have X-Raps and Daiwa SP Minnows both are effective plugs for Rockfish on the flats.

We have caught Stripers like this one on almost every trip… There are good numbers of 30 inch class Rockfish on the Susquehanna Flats right now. This one fell for a 7″ Bust’em Baits in Dry Ice color. I added Spike it Garlic Dip to the tail for coloring and scent.

“Thumper Jigs” caught also but generally caught a smaller grade of fish than snap jigging. Ange was jigging with me and caught these pictured below while snap jigging 7″ baits. 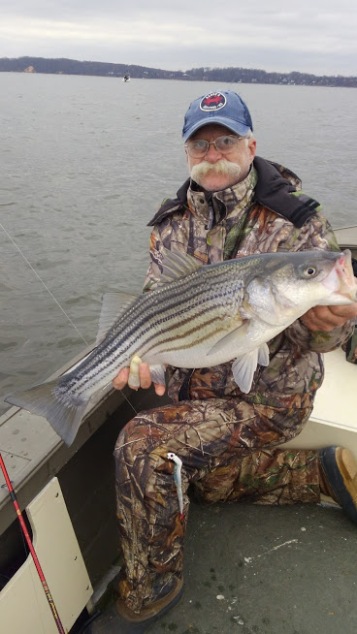 My friend Omar has been mixing it up between jigging and plugging and boated several like this fat fish on the black and silver, X-Rap (xrs-12). Warm, clean water again the key.

White Perch and Hickory Shad in the eastern shore creeks, Stripers on the Susquehanna Flats and Bass and Walleye in the river… The stage is set for very productive spring season in the upper bay! I hope to see you soon, in the shop or on the water.