The recent drop in water temperatures has really improved the Rockfish and White Perch bite! Even managing an illness I managed to get out on the river 5 times since my last report. Each trip produced good fishing in several different rivers. The reports from customers are very good too, with reports coming in from most upper bay rivers. The methods of catching vary wildly from one angler to another. One customer reported a slow but steady bite on Stripers to 28″ in the Bohemia river drifting live Eels on the channel edges. Another customer reports good catching while chunking bunker near Welch’s Point in the Elk River. We sold out of Bloodworms on Saturday so something is biting on them as well. Most all of my close friends and fishermen are fishing lures now and I believe this is the best way to catch large numbers of Stripers and White Perch. Lisa Doricchi and Kathy Nagle had 22 Stripers and this fine specimen on my home made jigging spoons, on 10/14/2016.

On Sunday (10/02/2016) I fished the Chester River with my friend Phil Kerchner we caught quality Stripers many different ways including topwater plugs, paddle tail swimbaits, metal Jigging spoons and snap jigging BKD’s. After we had our fill of good Rockfish we began to hunt the White Perch. Every Fall the White Perch move into the main stem of the Chester onto the shallower Oyster Bars in great numbers. This is the best time to catch a bunch of giant White Perch. Yes, better now than in the spring they are just in different places. Our Mac-Whacker Rigs are very effective for catching these.

On Thursday, (10-o6-2016) after finding the White Perch beginning to move onto the oyster bars Ange Harclerode and I returned to the Chester river. This day the Perch were not on top of the bars but found on the edges in a narrow band of water 15′ to 20′ deep. Deeper or shallower we found no fish. This pattern held true everywhere we looked. Most of the fish we caught were between 9 and 11 inches, keeping a dozen or so over 11″, including Ange’s 12 and a half inch White Perch. Big Perch excite me almost as much a big Stripers. In the fall, most every upper bay river has both species willing to bite.

On Tuesday, (10-11-2016) I got to fish with Lisa Doricchi for a few hours in the afternoon. Using our Mac-Whacker rigs we caught about 75 Rockfish mostly small… We did have this nice 25″ Striper. The fish hit right at the boat, I watched as it swam up on my lure and inhaled it  not 5 feet from the boat. Visual treats like these are why I fish mostly lures year round.

On Thursday, (10-13-2016)I fished with Craig Pteshetski, he keeps his boat slipped at Triton Marina on the Elk River. I met him last spring at the tackle shop, he had no idea where to start as far a Striper fishing goes… so I took him out and showed him the basics of lure fishing for Stripers. We left the marina at 1 pm and fished our way south to Worton Point. We caught small Rockfish at almost every stop and had a fast white Perch bite with fish to 11″on an Oyster lump in 10′ of water. While no big fish were caught that day Craig now has an idea of what to do and where to do it. Craig with the first fish of the day a 19″ Rockfish!

On Sunday, (10-16-2016) I fished with my best friend and fishing partner Ange Harclerode in his 14′ tin boat. We fished a creek that enters the main bay above Rock Hall. While looking at the forecast I saw Sunrise, High tide and a Minor so-lunar period all with-in 30 minutes of each other… This excited me because when these three things happen near the same time fishing can be fantastic! We were not disappointed the fishing was great! Launching well before sunrise, the very first cast produced a small Striper.  the next hour was spent fast catching and releasing Rockfish on top water “Spook-type lures”. The fish were slamming the lures, sometimes knocking them out of the water 3 feet in the air. We were giggling like little kids! As the morning progressed the shallow top water bite subsided. With the bright sunshine the fish began to hide under docks and boat houses seeking shade. Remember they don’t have eyelids so they can’t squint or blink to get out of the bright sunshine. We caught almost as many under the docks as we did on top water. This fish came from the under the docks on a paddle tail rigged on a skirted jighead.

Ange with a dandy! While we were messing around posing for pictures this one got away. We had both mashed down the barbs on our hooks to make for easy releases… it worked a little too well, this time! 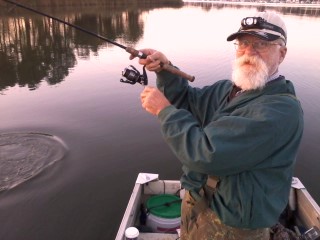 So, it has been a great week of fishing all over the Upper Bay and should only get better. Now is the best time to get out there as Stripers and White Perch are here in good numbers and willing to bite. This good fishing holds up well until Thanksgiving… Sadly many folks put their gear away and winterize their boats during the best fishing of the year. Don’t be one of those guys… Catch’em up now!