The fishing this fall has been Excellent! It just keeps getting better How good is it gonna get? Who knows, I hope it lasts a little longer. Upper Bay Anglers have been blessed with lots of keeper size fish this year. Anglers fishing from boats, shore and bridges have seen sporadic catches of Stripers. The fish are on the move, here today and gone tomorrow so finding them is the hard part. While fishing from shore the other night my first spot was barren of fish. I went to my second spot for about an hour and came back to the first one to find the structure full of fish. Look many places and look often… The same with floating grass… sometime your spot will be full of grass to the point of it being unfishable. If you will return to that spot at a different stage of the tide it may very well be clear and fishable. 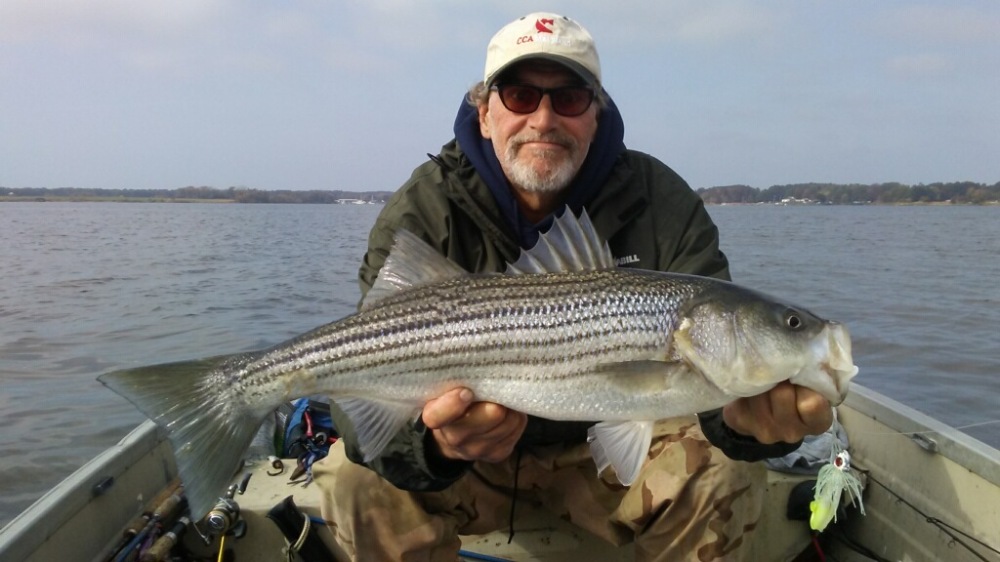 Last Wednesday (11/02/2016) Ange Harclerode and I fished the Chester River, focusing on creek mouths and Oyster bars. It was fast catching from the first cast to the last! The first cast of the morning yielded a 26″ Striper. We caught fish on the skirted paddletail/ jig combo, snap jigging BKD’s and casting and trolling X-Raps. Throughout the day we had all the Rockfish we wanted catching several over 25″ up to 30″… probably 35 or 40 fish for the day and very few short fish. This trip was one of the best for me this year…Ange too! 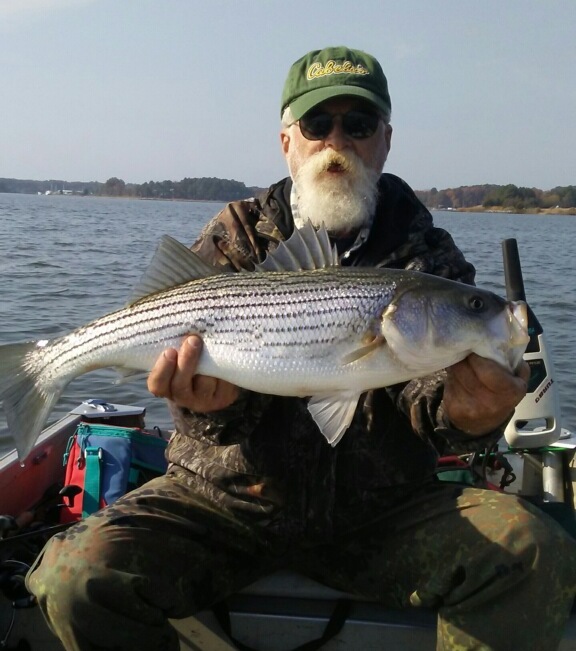 The following day Ange took our friend Larry Gorski back to the same place… The fish were gone. They pulled the boat and moved to another creek, Where they caught keeper size Rock, White and Yellow Perch. Here is Larry with one of his limit, of  Yellow Perch. 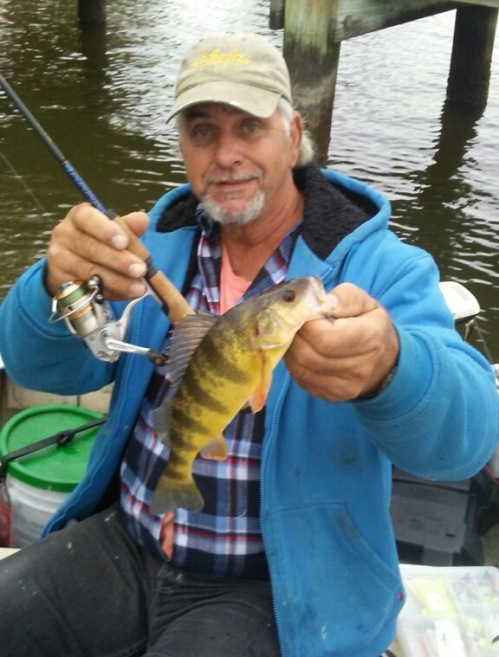 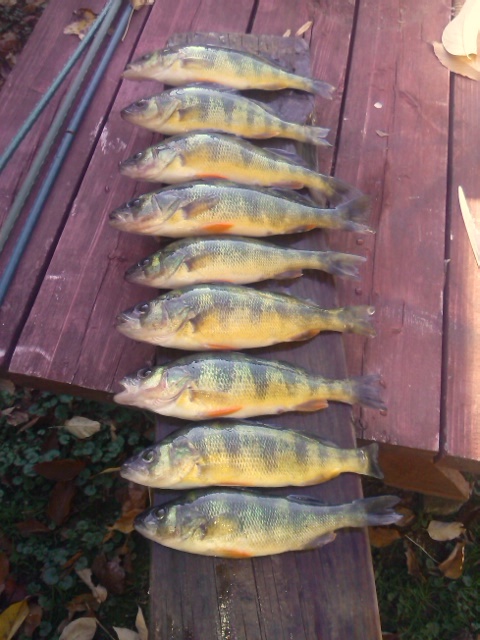 Sunday I fished with Ange Harclerode and Dan Kilroy and had the most rewarding day of fishing in a long time. We started at sunrise in the Chester River by noon we only had a handful of short fish to show for it.The North west wind was howling and the drift was too fast for good catching.The Fish we had been catching for over a month had moved. We pulled Dan’s 22 ft. Sea hunt center console and moved to another creek. This one entered directly into the main bay. Fishing in the creek we had several short fish and decided to move out to some near shore structures. Ange caught a beautiful 35″ Striper on one of these structures, while swimming the skirted jig beside the structure. We then moved south looking for some more fish. We found a school of Rockfish about a mile long and 15 ft. thick with little ones on top and big’uns on the bottom. 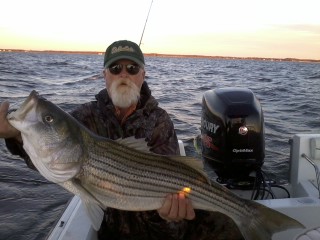 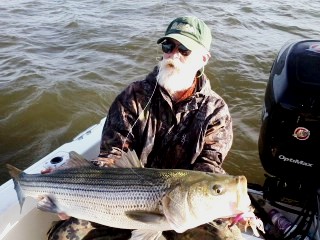 One after the other… 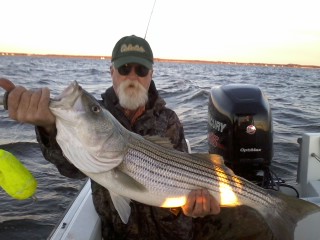 Dan and I were catching fast also. We had many double and triple hook-ups… several times we all had fish on, running us around the boat it was pandemonium! 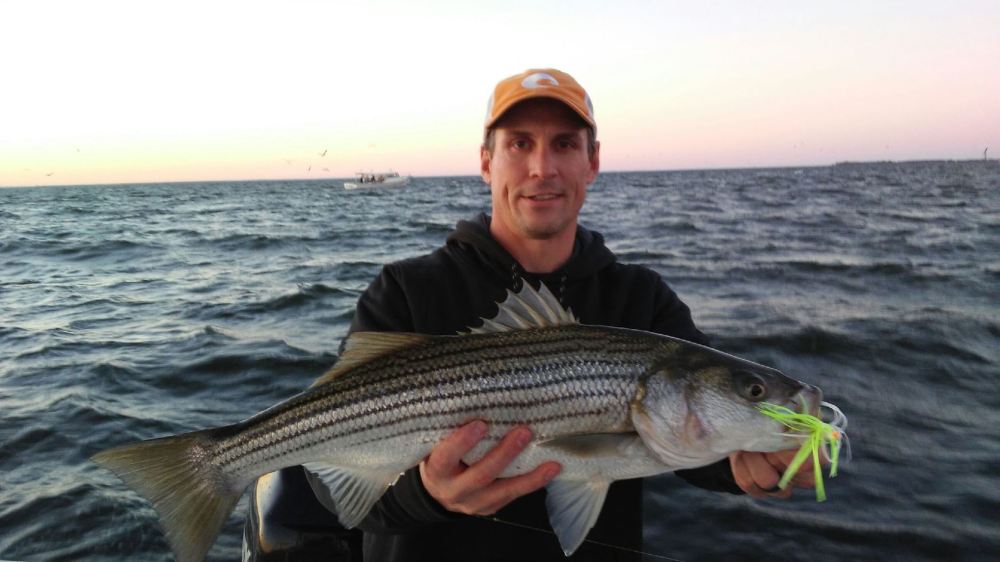 We had these fish all to ourselves and the fast catching lasted about an hour and a half and ended when the sun set. We made the run back to the ramp with just enough light to see.  Another great day in the books…Very rewarding after looking for fish all day. Persistence and desire kept us looking when most people would have gone home. Wish you could have been there! 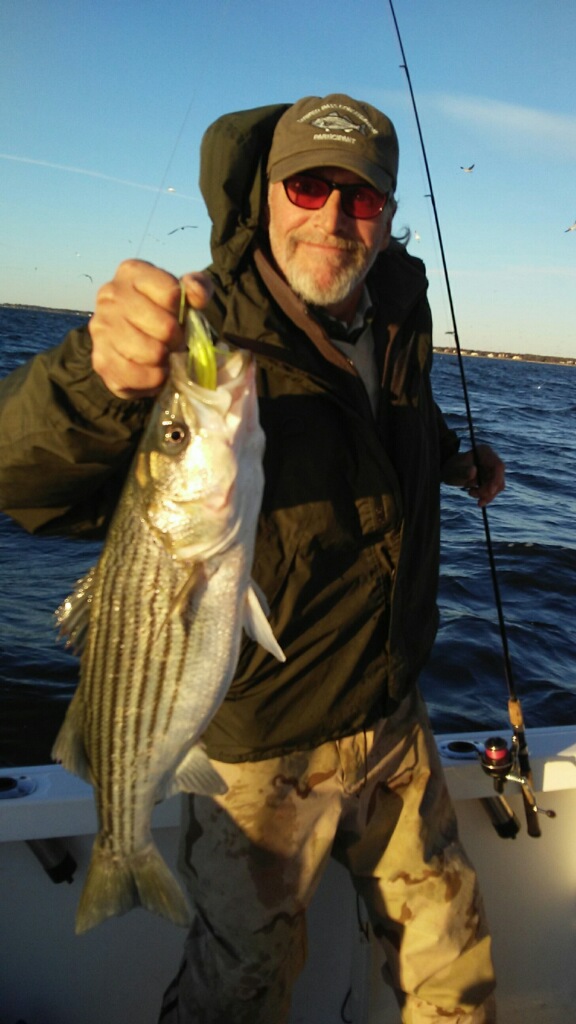