In my last report I said “The cleanest water would see my lures”. With the Susquehanna River in flood stage for almost 2 weeks the good fishing on the flats came to a screaming halt as cold muddy water full of debris filled the Flats and North East River. Knowing that those conditions make for poor fishing I have been avoiding the area, like the plague!

On Monday April 10th, I fished with two long time friends Gerald Eldreth and Alaska Dave McCormick on the Chester River. We were looking for the last of the bigger White Perch before they leave the creeks. Using our custom hair jigs and plastic baits by BUST’EM BAITS called “Stingers” we caught pretty steady on a nice grade of fish but 11” or better were few and far between. We kept twenty five  9″ to 10″ Perch for the table. Gerald began using one of our “Mac-Whacker” rigs with a dropper fly above and was steadily jigging up the White Perch and Hickory Shad. A fun day with good friends!

Above is Gerald with the Mac-Whacker catching White Perch and Hickory Shad.

Dave McCormick below with a pair of typical keepers on this day.

On Tuesday, April 11th I had Stripers on my mind, so did Dan Kilroy. He said “Let’s go south, the Susquehanna Flats is not the only area open to “catch and release fishing”. Dan’s father Brian and my buddy Gerald Eldreth joined us on this scouting trip. None of us had ever fished this area around Kent Island at this time of year and had no idea what we might find. We launched on Kent Island and armed with some Intel from a few buddies that live down there, started searching for Stripers in 6′ to 10′ depths with clean hard bottoms. This pattern proved to be productive in several areas. We had a dozen fish within a mile of the ramp. We encountered good numbers of Stripers in some places and absolutely nothing in others. Clean hard bottom areas with current produced the best fish this day using our usual light tackle techniques; we caught fish on X-RAPS, THUMPER JIGS and TONY ACCETTA SPOONS. Snap Jigging BKD’s and Bust’em Baits was by far the most productive method  of catching. The larger fish were all taken this way. 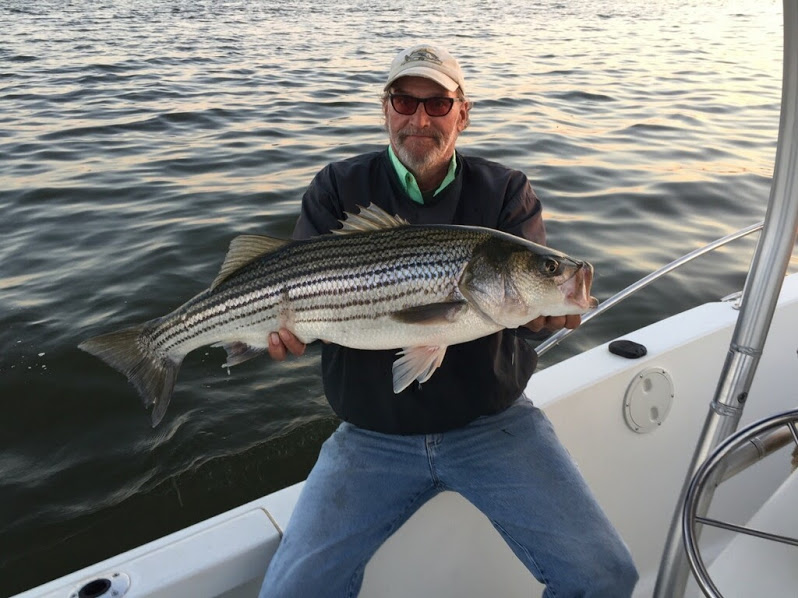 On Thursday, I went to my hometown creek in Cecil County and did a little Hickory Shad fishing with pleasing results. This is a right of spring for me and I’ve fished it almost every year since I was 10 years old. I feel like a kid on that creek…they are healing waters! Using a  1/8 oz. Shad Dart and Silver Nunguesser Shad Spoon I caught about 20 nice Hickory Shad and some White Perch, Yellow Perch and a Largemouth Bass. As the bite died on the outgoing tide, I moved downstream about a mile and intercepted them again catching a few more. I love Spring time in the creeks! Herring were everywhere! 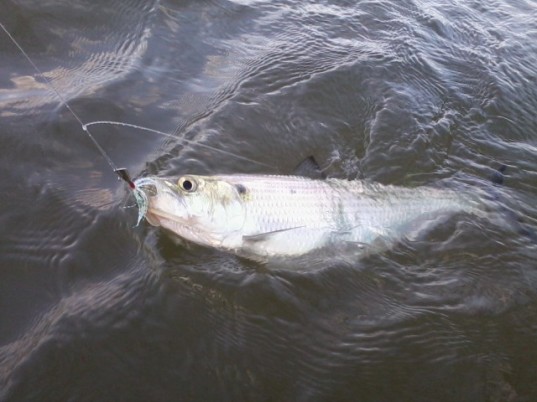 As I was riding home from Shad fishing, I got a call from Dan Kilroy wanting to head back south with his buddy Bill. The next morning we headed to the Kent Island area again. This trip we focused on the main Bay side of the Island. We found very dirty cold water near the channel edges and cleaner, warmer water in the shallows. The pattern of finding fish in 6′ to 10′ depths with clean hard bottoms and current flow held true again.  Dan had an idea that cost him some fisherman’s anxiety insomnia the night before; it was our first stop. We Whacked ’em good there, it was a mid-twenties size fish every cast for hours. His friend Bill took the big fish of the day at about 36″ and it was quickly released as we seldom kill fish over 30″ even when legal to do so. When the bite on the bay side died we pulled the boat and launched at another ramp and finished out the day on the other side of the island catching a few more there, same pattern. Think patterns not places!

This past Saturday morning, before going to the shop, I took my niece Lindy and and her young friend Giovanni fishing at the Charlestown Pier. This is one of many “license free” fishing areas around the state. Using Bloodworms and mono top and bottom rigs we caught White Perch as soon as the bait hit bottom. As the tide flooded the Perch moved close enough that both Lindy and “G” caught a couple on the ultralight rod with our hair jigs. Try to take time out of your day to take a kid fishing, you’ll feel better for doing it!

On Easter Sunday my friends Gerald Eldreth and Timothy Smith found a great White Perch bite in the lower Susquehanna River. It’s an Easter tradition every year that the guys take their ladies, Linda and Kathy, Perch fishing. When these folks say it was good, you can believe it! Great tradition!

On Monday, April 17th Dan Kilroy hosted Ange Harclerode and I on his beautiful 22′ Sea Hunt center console to fish the lower Susquehanna River. We started out looking for Stripers in the river with no luck. Then we turned our efforts to Perch Jerk’n and found a very good bite on mixed sizes of White Perch. We kept about a dozen over 10″ for the table. There were some jumbo’s caught ,too. Dan’s friend Dave joined us late and caught the biggest of the day. Ange had one almost as big. Fast action for awhile on larger fish. 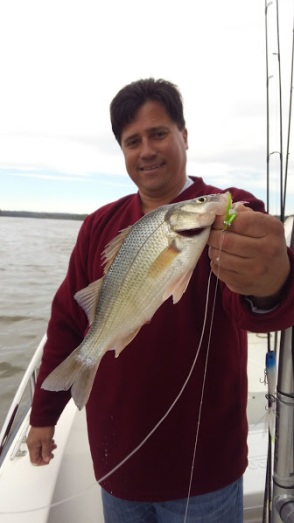 It was a week of good fishing but not in the places we typically fish. We have had to adjust to the terrible conditions in the upper bay by fishing away from the muddy water. Some rivers are barely effected by what comes down the Susky and those places have had clear water and good fishing all week. The fishing on the Susquehanna Flats is poor right now as the muddy water has moved some fish away from the area. The waters are clearing and warming each tide brings the hope of fresh fish with it…

I hope to see you on the water or in the shop!