Hi folks! I usually keep the YACK REPORT confined to my own experiences and what my crews caught during the week. However, I want to share something outside of my personal experiences. There is still a very good bite on Stripers during low light periods in the Susquehanna River just above Port deposit, the best bite has been on the Cecil County side before the gates at Conowingo Dam open. My friends have been wading or Kayak fishing in the early morning hours often limiting out in a short time. They are typically done fishing with limits all around by 6 am. I have been told the bite is over by 7 am… Nice to catch a full limit before work in the morning! Many of these guys are fishing at 4 am so as the saying goes “The early bird gets the worm”. Topwater Lures like the “Smack-it JR.” and “Sara-Spook” have been catching well.  The X-RAP ( XRS-10) slash bait in black and silver and white plastic paddle-tail lures have also taken some nice fish. Pictured below is a fellow lure builder Donnie Schofield with an early morning limit recently; we have some of his Shad Darts in stock at Sarge’s! 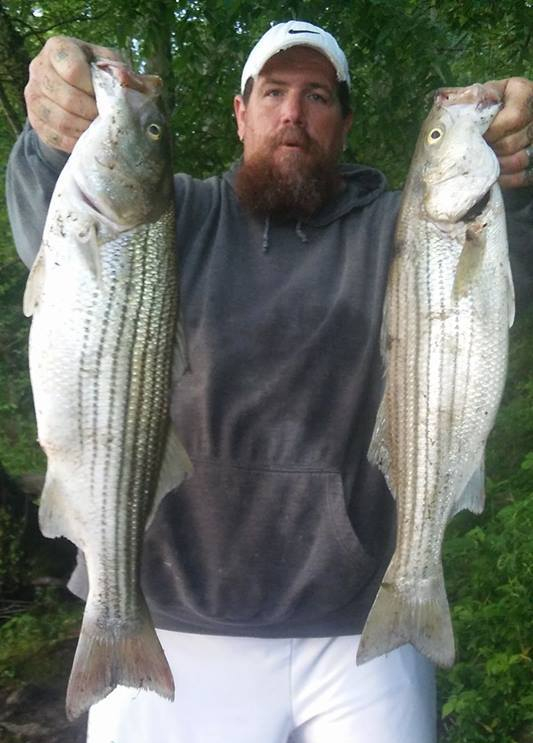 This week I fished with Dan Kilroy in the Mid-bay area north of the Bay Bridge and in Eastern Bay. Once again the weather man was way off with the wind direction and speed. We had planned to fish the main Bay but the rough seas from the north wind against a strong incoming tide made for sloppy conditions. We decided to launch on the back side of Kent Island and fish in the Lee of the Island. Here we were somewhat sheltered from the relentless north wind and had decent conditions. The pattern has been finding fish along the 30′ contour line in the main bay locations… it held true here as well. The very first drift on likely marks produced fish up to 30″, the same pattern as in the Main Bay with the Stripers being suspended about 20′ down. Dan Kilroy caught fast on a Bust’em Baits 5″ bait in Mackerel color. These dark colored baits have been producing well lately. He had a very good day!

A few hours later the tide turned and the confounded wind laid down. We quickly pulled the boat and trailered back to the main bay ramp and launched again. Total time from when we decided to leave to the time we were fishing again was about 40 minutes. We are becoming adept at the quick launch and retrieval drill.  The Main Bay conditions were favorable and we caught a few fish at almost every spot. The interesting thing is where we caught them. Fish were caught on artificial reefs, bridge pilings, deep water rock structures, channel edges, rock ledges and suspended in open water in as much as 60 feet. Good signs of bait fish were present at most locations. We would find a school of smaller fish and stay with them while looking for signs of bigger fish. While drifting in 50′ of water a Thermocline was seen 25′ down. The Stripers were just above it. That was true almost everywhere that day. That was the pattern. Think patterns not places! At this spot we found adult Bunker running for their lives. This is where we caught our best fish of the day and Dan caught the lion’s share of big fish… like this one, almost a 36″ fish! That is a big fish for summer on the bay! It was taken on a 5′ Bust’em Baits Jerk bait. Adding SPIKE-IT Garlic Dip or PRO-CURE scents helped the bite on bigger fish.

There must have been a bunch of them because I caught some too! I did best on the Lick’n Chicken color 5″ Bust’em Bait. They did not want a larger bait at all…I tried. 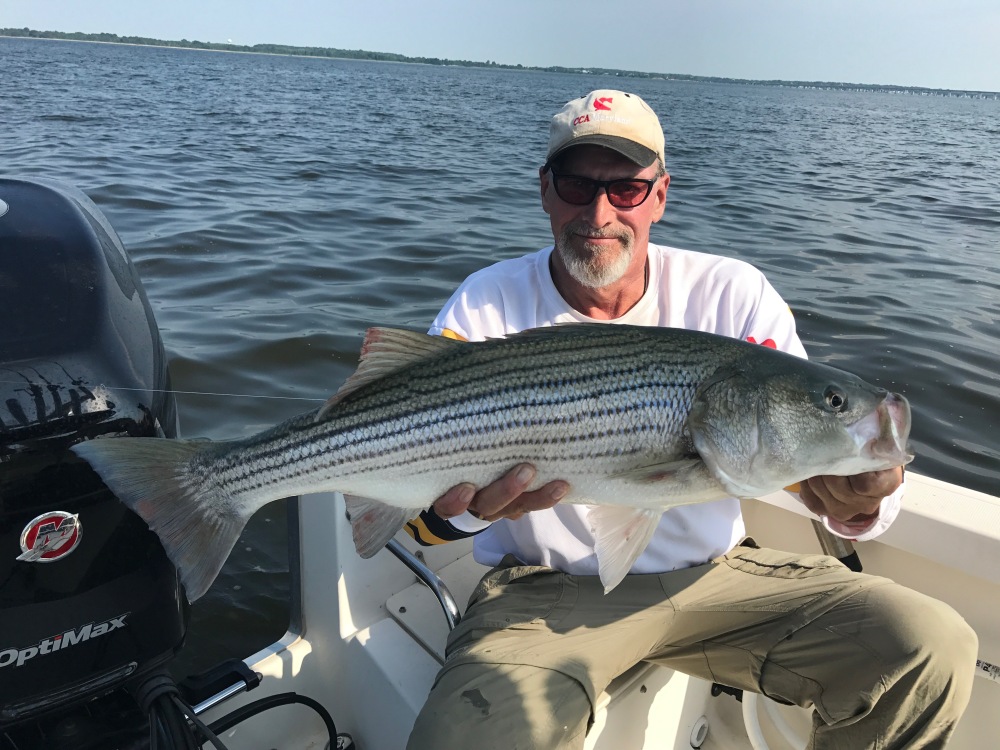 We caught fast until the tide quit running out with no bite on the slack water period. Casting out and counting down a 15 count put the jig in front of the fish, too high or low did not get hit. “You had to be in them to catch them”…we were in them for awhile!

A bird’s eye view of Dan’s fish on the measure stick. A solid 35″ Summer RockFish.

Here is a screen shot of the depth finder while over the fish, so you can see why keeping the lure at depth was so important. Snap jigging at a specific depth catches these fish.

This may have been my best day of fishing in 2017 as we had high numbers and lots of bigger fish. Thirty inch fish were released without even a second look or a picture. We caught over a hundred fish that day with each of us catching several fish over 30″. It was nice to just be an angler on board. Usually I am the one tasked with finding the fish, the pressure of it can weigh heavy on a person! Much respect to ALL of the guides out there!

Dan Kilroy has become a very good Bay fisherman in a short time. It seemed every time the boat came off plane we were on fish! Reading, studying charts, understanding the quarry and their food and networking with other good fishermen is paying big dividends. Dan is certainly having a great 2017!

There is excellent fishing to be had just an hour ride south from the tackle shop. Big fish have stayed in the Mid-Bay area and are feeding on adult Bunker. The afternoon bite has been best usually picking up around dusk. Hope to see you in the shop or on the water!