These cooler nights really have the fish of all kinds snapping at the hooks! This week I fished above and below the Bay Bridge and in a couple of creeks on the Eastern Shore. Everywhere I went we found fish of many species willing to cooperate. Rockfish were often the target species… but as a by catch we encountered Croaker, Spot, White Perch, Bluefish, Weakfish and Catfish. Our metal spoons w/ a dropper fly attached above we call “Mac-Whackers” and they caught many of these species as well as keeper Rockfish. All of our better fish this week have come on shallow structure during the peak tidal flow. This pattern will hold as the waters begin to cool. Get ready for some great fall fishing! 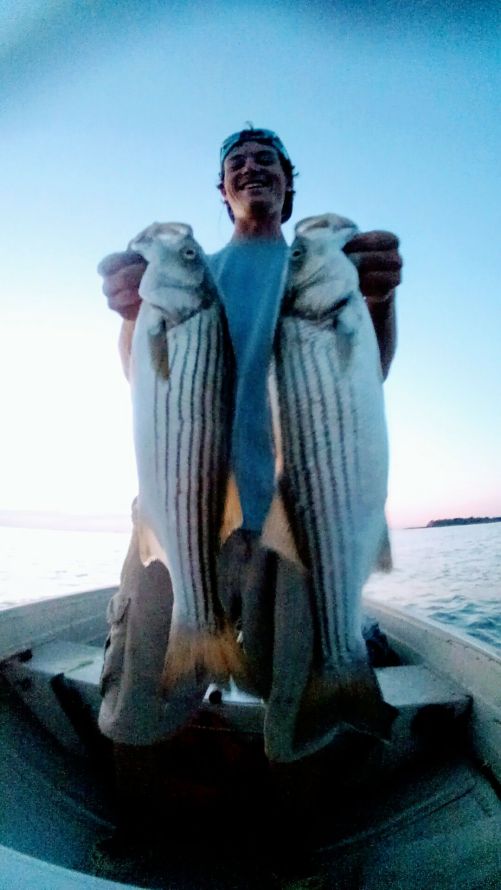 Tyler McCummings (pictured above) is a regular at Sarge’s Bait and Tackle. We have been sharing lots of information back and forth and this guy gets it! Wise beyond his years, Tyler and young folks like him are the future of our sport. It is a pleasure to share a day on the bay and teach the young guns a thing or two. Tyler joined me on a quick evening trip out of an Eastern Shore creek. We found breaking fish under birds right at the creek mouth, most were small. We stayed with them awhile snap jigging and as the sun set low in the sky, the big fish started to bite. Great fun! For just a minute, I felt as young as the guy I was fishing with!  We probably had 60 Stripers in just a few hours! This is good medicine as we were all smiles with the good catching! I think he learned a few things, he sure looks happy!

On Thursday, I fished with my son Joseph Yackanech and my Granddaughter Leah, pictured above with one of her small Flounder caught on our jigging spoons. We set out of Deale, Md. where my son keeps his boat slipped. The Western Shore was covered up in “red water”… this is low oxygen, high acidic water is probably from an algae bloom. We ran across to the East side to find clean water and breaking fish. The three of us caught over a hundred Rockfish, several nice Bluefish, Spot, Croaker, weakfish, Flounder and white perch. A fun day was had by all! I love seeing my granddaughter jigging with the best of fishermen and keeping up. Good Stuff Leah!

Ange Harclerode and I have been fishing the Chester River for five seasons now and are starting to figure things out a little bit. The good fishing usually starts in late August, so yesterday we made a scouting trip to the area and were pleased with the results. Fishing from one of our favorite creeks catching White Perch and Stripers at most spots. The depth finder is broken so we fished places where we have caught them before. This day my depth finder was a 1 ounce jigging spoon! Confidently moving from spot to spot we caught most places on a variety of lures. While fishing a rockpile in 6′ of water looking for perch we encountered a school of mid-twenties Rockfish on the shallow structure. I was using using my 6′ ultra-light rod to cast the Perch Buster Spinners to the sweet spots. This size fish on the tiny tackle was great sport! Why do these fish bite such small lures… who knows!

We left that spot as the bite ended and went searching for the next spot. I know a hump in the river that rises to 10′ and is surrounded by 25′ of water. I used the Navionics Boating HD app on my phone to perfectly place us on the structure. Ange’s first cast produced a barely legal fish. Off in the distance I spotted some breaking fish with birds diving we ran full speed to the action. As we approached from the down current side I slowed the boat and stealthily eased towards the fish. Here the action was immediate and  intense with heads and tails of breaking Rockfish seen over a football field size piece of water.  Fish were coming on every cast on the Thumper Jigs. Snap Jigging did not catch as well here. Mac-Whackers cast and fast retrieved to the boat caught two at a time! Most of these fish were 19″ to 22″ fish and they were really lit up and fighting aggressively. The larger fish we caught from this batch all had sores or a red rash on them and were released. The surface action was sporadic. The fish would break the surface for a minute then go down again. One group was moving fast and had bigger splashes in it. Our first cast to this group I got bit off and Ange came tight on this fine 3 lb. Bluefish! Sadly, we had another bite off and caught a few more Rockfish but no more Blues. I love Bluefish on light gear! When Ange brought this one to the boat it jumped at least three foot above the water and then swam straight down to bottom, while his reel was screaming for relief! They won’t be this far north for long so go get some!

After catching our fill of Rockfish we seriously turned our thoughts to White Perch  Jerk’n. “Mac-Whackers” were the lure of choice, after looking several places, I found what we wanted. Stacked up on an Oyster shell bottom was a school of jumbo sized White Perch. Yea Buddy! The first good one was 12″…

The very next drift over the area brought up this jumbo Perch nearly 13″ long! This fish bit a fly nearly four inches… Big Bait Big Fish!

Ange followed up by catching the two largest fish of the night, one was just over 13″…

This Fall is shaping up to be one of the best! Lots of bait and predator fish right where they should be this time of year! The White Perch Jigging bite last night was impressive!

It does not matter what you fish for…. this holiday weekend has lots of fish in the upper bay and conditions are right for catching them. Happy Labor Day! I hope to see you in the shop or on the water!