While I was chasing Hickory Shad with Phil Kerchner, Ange Harclerode and Larry Perch were fishing near Ange’s house for White Perch and catching some good ones,too! Larry was my first customer when I started working at Sarge’s Bait and Tackle. He bought 2 of these little “Crappie rods” as he called them, one for him and one for his fish buddy Tom. These are great little rods. Their strength can be verified by this Catch… While White Perch fishing with an 1/8 oz. jig and small plastic tube Larry Perch hooked and landed this 36″ Striper. Ange witnessed the epic battle and said “the fish took him all over the creek before he landed it”. WOW! What a catch! Congrats Larry Perch on a great catch and awesome landing skills…

Congrats on a great Catch! This fish caught on an ultra-light rod, tiny reel w/ 6lb. mono and an 1/8 oz. jighead with a small plastic tube attached. Awesome landing skills my friend! — with Larry Perch and Ange Harclerode.

These little Shakespeare rods are awesome with a great price point too! Light enough to throw tiny lures strong enough to land a big Striper… We got them at the shop! — with Larry Perch and Ange Harclerode. 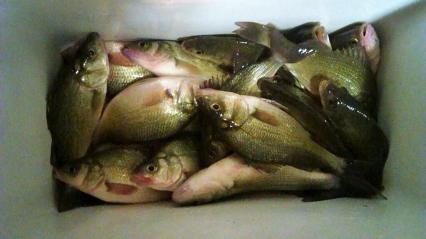