I met Phil Kerchner last spring at one of my Yellow Perch talks, a few days later I gave him the “firty centy tour” of the Cecil county’s best “truck fishing”…

I showed him some of my best spots in several different rivers.

Today he returned the favor and gave Ange Harclerode and I, a “fifty cent tour” of the bay area north of Kent Island in his beautiful 23 ft. Parker.

We stopped at a fishy looking point and took 2 Rockfish on topwater just after first light. We then moved out to the main bay and began the search following an edge in 25′ of water. We found marks but could not get them to bite.

We moved and kept looking. Cow Nose rays were abundant at every place we stopped and we saw a large school of Dolphin feeding on Bunker.

Our third stop yeilded 2 keepers out of a couple dozen fish. These fish were tight to submerged rock pile we were fishing. We then moved again, again and yet again finding fish most places but kept moving to find better fish.

When we found large schools of Bunker we found a better grade of fish. The bite was sporatic all day it would be on for 20 minutes then shut down…only to pick up a few minutes later.

All in all a fun day on the water, 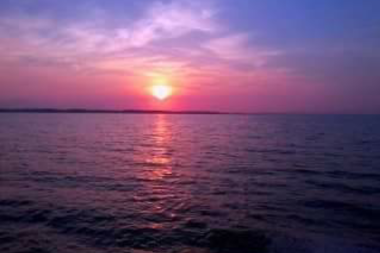 lots of fish caught by all. This is a fine start to the holiday weekend! Happy Fourth of July!!!!