Anyone that knows me, knows I don’t care for treble hooks. It seems one hook catches the fish in the mouth the other in the eye or the gill or someplace just as bad. A Rockfish thrashing around the boat with a mouthful of treble hooks is not good, nor is it safe. More than one Rockfish has thrown the hook and drove the other one into my hand. Once Gerald Eldreth had one hook of an X-Rap stuck in his hand and about a 5lb. Striper hanging off the other. I wanted to get a picture but my buddy was turning pale and winced as the fish thrashed around. I grabbed the pair of heavy duty “Dikes” and quickly cut the hooks off the lure and then removed the fish and released it. I keep a pair of these heavy duty cutters on board for just that reason. My next move was to remove the hook from Gerald and get back to fishing. Treble hooks have made me nervous ever since that day. To ease my paranoia I have experimented with replacing treble hooks with single hooks for several years now. These new In-Line single hooks by VMC are perfect for the job.

I really like these hooks and I think my hook up ratio may be better with these than with trebles. No undesirable effects to the action of the lure was noticed. One of the problems with the treble hook on the belly of a popper, is that it often fouls on the running line. The single hook does not foul as often, offers better fish-ability and is much safer. These hooks are very stout! You will not be disappointed by a straightened hook on a good fish. I use the larger 5/0 size on my bigger poppers like Smack-its. While the 3/0 size is just right for the #12 X-Rap. Most Treble hooks sized for Stripers can be replaced by either of these two sizes. Just run one off the split ring and run on an inline single… so easy! 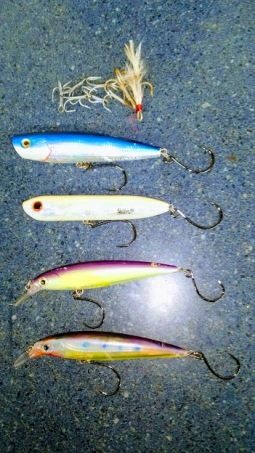 Changing out the trebles is “Good for the fishermen… and good for the fish”. Much of the time we are catch and release fishing, these single hooks are faster and easier to remove. Thus reducing the mortality rate of fish in warmer summer water. A sparsely tied hair or flash can easily be added to the rear hook if desired. Give them a try, you might like them, I sure do… Be safe and  I hope to see you in the shop or on the water!